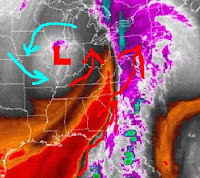 The above image is the Water Vapor Satellite, the red L is the Upper Level Low that is slowly spinning away from us and the cloud will eventually leave too! We have a North Westerly wind with lows in the upper 30s to low 40s. Sunday Night we could have a frost with lows around 33 degrees. The storm has also brought rain in the drought stricken areas, with rain from Michigan to Florida!!Stay Warm!

Posted by KC Weather Admin at 8:23 PM No comments:

Good Tuesday Evening,
Interesting changes are happening, cooler air with highs in the 50s and mid 60s will be for the rest of the week. Uless, the ULL (UPPER LEVEL LOW) down in the South East starts moving North East, which I think it will. This would result with a day or two with highs in the low 50s and lows in the upper 30s. And this would also mean, a cold rain which stands at a 30% for Thursday Night into Friday. New Data will be coming in around 9pm or so. I'll try to update the blog, after it is in. I will not be here tomorrow, I am going down to Branson,MO and Silver Dollar City for the day Wednesday.
Enjoy the cooler fall like Temps!
Andrew
Posted by KC Weather Admin at 7:03 PM No comments:

Posted by KC Weather Admin at 8:01 PM No comments:

Some Rain Showers and Windy

Good Afternoon,
There is a 70% chance of some rain showers later this afternoon, the big event will be windy conditions with wind Gust up to 45mph!! Right now our next chance of rain is early next week. As more data comes in, I will talk about it more.
PLEASE SNED IN YOUR RAIN TOTALS FOR THIS WHOLE WEEK, INCLUDING SATUDAY'S RAIN TOTALS! THANKS!
Andrew
Posted by KC Weather Admin at 1:52 PM No comments:

A Flash Flood Warning for Douglas County,KS, Franklin County,KS, and Osage County KS has just been issued until 4:45pm. 1-2"+ fell there in only 30 minutes. WOW!! Take a look at image from First Alert Storm Scan Doppler Radar at 1:46pm, Heavy Rain continue around the KC area. As for the Severe Weather threat, we still have a Slight Risk for now, but we have to watch very carefully as some very strong T-Storms around Chanute,KS is moving North East and could effect us. I think they should weaken as they enter our stable, cooler atmosphere. Please Send in your Rain Totals, your Severe Weather Reports, and if you see any peeks of sun. If the Sun does come out, which I don't think it will, then our Severe Weather chances go up a little bit. Stay Safe! I'll keep you updated on this blog. Next update around 4pm.
Andrew

Posted by KC Weather Admin at 1:49 PM No comments:

Look at the above image of First Alert Storm Scan Doppler Radar, the storms are almost here!! Rain Totals will be from 1"-3"+!! A Flash Flood Watch is in effect for most of our viewing area including the following:

The watch goes until 1am tonight, right the only counties in our viewing area that are not in the Flash Flood Watch is Douglas County,KS, and Franklin County,KS.
I have also painted on the radar the Severe Weather Threat, for now the Moderate Risk is 55 miles South of KC, the rest of us are under a Slight Risk. There might be some Large Hail, or Damaging Winds, but the Tornado Threat is way South of here. I'll keep you updated throughout the day. The Next update will be around 11:30am.

Have a Great Day!
Andrew

Posted by KC Weather Admin at 9:41 AM No comments:

Take a look at the above image, As you can seen we are in a SLIGHT RISK of Severe Weather with a MODERATE RISK just South and West of us, I think we will be having rain all day tomorrow which will help minimize the threat. We could still see some Large Hail, and Damaging Winds, but I think the threat for Tornado's will stay west and south of us. Salina,KS, and Oklahoma City have a better chance for Tornado's than us. Check tomorrow morning as new overnight data will be in. I'll keep you updated all day tomorrow, so make sure you keep checking this blog, and tell others about the blog. I'm updating the 5 Day Forecast right now, and will be uploading it to the KC Weather Site.

Posted by KC Weather Admin at 8:40 PM No comments:

Good Thursday Morning,
Our next chance of rain is Saturday! It was chilly this morning, but unfortunately no chance of snow yet. :(
The Discussion from our last blog entry continues Today. Don't forget to Do the Poll on the Left:
Do you believe in Global Warming? AFTER VOTING CLICK ON COMMENTS AND POST A COMMENT SAYING WHY YOU BELIEVE OR DO NOT BELIEVE IN GLOBAL WARMING.
Two more reasons I don't believe in Global Warming:
1.Why would our wonderful Creator make Fossil Fuels and other stuff for us to use for energy, if it harms the Atmosphere?
2. Even when the earth warms up, there are special proceses that go on to cool the earth. I call it the "Automated Atmosphere Air Conditioner", The Clouds can act as a blanket keeping the earth warm, but they also help cool the earth by having the water droplets form into raindrops and then it rain on the earth, not just cleaning the earth, but also, cooling the earth down. And clouds also reflect sunlight back into outer space which helps cool the earth. So, even of Global Warming was real, there would be more clouds, that would cause it to rain and reflect sunlight back into outer space which would cool the earth.
I'll try to update Weather Cast later this Afternoon!! Have a Great Thursday,
Andrew
Posted by KC Weather Admin at 10:12 AM No comments:

Good Tuesday Morning,
I would like to start this topic up with your opinions, Do you believe in the Global Warming Theory?
THIS IS MY OPINIONS AND BELIEFS ONLY:

"...The Historical Record
The observed climate record of the past century represents one of the major flaws in the global warming theory. During the 20th century human emissions of CO2 grew rapidly, with most of that increase following the Second World War. According to the theory, this should have caused temperatures to rise over the past century, with most of that increase coming after World War II. Surface measurements reveal that the earth's temperature rose approximately 0.6�C during the 20th century, but this warming does not match the theoretical predictions. Most of the warming, 0.4�C, took place before the early 1940's, before the release of most man-made CO2 into the atmosphere. Then, until the late 1970's, while human emissions of CO2 rose rapidly, the earth actually cooled approximately 0.1�C, only to rise by another 0.3�C by the end of the century. Surface temperature records reveal almost no correlation between human CO2 emissions and temperature increases. The majority of the temperature increase took place before CO2 levels rose substantially, then the temperature decreased while CO2 emissions rapidly rose, only to reverse the trend and slightly increase by the end of the century.(3) Understandably, the history of actual human CO2 emissions and the temperature record does little to support the global warming theory.

However, climatologists base this temperature record on surface measurements from ground stations. Scientists know that these records suffer from a systematic bias that tends to increase the temperature they record, the urban "heat island" effect. Many ground-monitoring stations are located in areas that have grown into major cities. The high volume of human activity, and asphalt, which tends to trap heat, that a city contains raises the temperature of a city several degrees above that of the surrounding countryside. Consequently, temperature measurements taken in or near a city are noticeably higher than those taken in a rural area, and this bias shows up in the surface record.(4)

Fortunately, for the past quarter century scientists have an alternative climate record unaltered by the heat island effect, the satellite record. Since 1979, satellites orbiting the globe have recorded the earth's temperature using instruments with an accuracy of �0.01�C. These more accurate satellite sensors show that, except for a one-year warming spike in 1998 caused by El Nino, the earth's average temperature did not rise between 1979 and 2000.(5) Temperature measurements from weather balloons corroborate these findings, which cast further doubt on the global warming theory. While atmospheric carbon dioxide has steadily risen, the most accurate measurements available show that the global temperature did not increase over the past two decades.

Still, the best records available suggest that global temperatures rose slightly over the past century. However, this is hardly unusual. Global temperatures naturally change, and have done so for thousands of years before the invention of the internal combustion engine. Over just the past millennia, global temperatures swung by several degrees. During the Middle Ages, in the medieval climate optimum, temperatures averaged one to two degrees higher than today's levels. During this time, Greenland was actually green, and supported vibrant Viking settlements. Following this warm period, and lasting into the mid 1800's, came the so-called "Little Ice Age," during which global temperatures dropped noticeably below today's levels. Since the 1850's, temperatures have risen as the earth left the mini-ice age.(6) These climate swings occurred as a result of natural processes, long before humans began emitting significant amounts of CO2. The fact that the earth has warmed by half a degree centigrade over the past century hardly represents an unusual historical occurrence or evidence that human activity has altered the climate..."

PLEASE ENTER YOUR OPINION/BELIEF! I will try to updated Weather Cast Plus this Afternoon, I have been busy.

Posted by KC Weather Admin at 9:59 AM No comments:

Good Evening,
The weekend storm is odd, new data will be coming in soon, so I'll hopefully update the blog after the new data comes in. We have a good chance of rain Sunday Night into Monday. How much rain? Right now to hard to say, but I would say maybe 0.25" to 0.50" is possible. I will keep you updated!
Have a Great Evening,
Andrew
Posted by KC Weather Admin at 9:33 PM No comments:

Look at First Alert Storm scan Doppler Radar (click to enlarge), you can see very Heavy Rain coming towards KC. This could be Round 1, as the Cold Front is lagging behind. The 2nd Round could be severe, I'll keep you updated on the blog!! Send your Rain Totals!!

Have a Great Tuesday,
Andrew 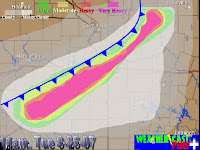 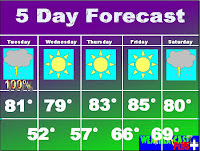 The chance for widespread rain tomorrow is up to a 100% chance. There is a SLIGHT RISK of Severe Weather, with main threats being Large Hail, and Damaging Winds. Rain Totals will be between .50"- 1.50" , with Localized 2"+. So some Flooding could be a problem. Then our next storm system we look out for, which will come in around Saturday, which could drop our High temperatures in the 50s or 60s!! That could also be a Heavy Rain producer. I think could be a better chance for Severe Weather on Saturday with the potent system. Above is the 5 Day Forecast, and Future Cast for Tomorrow.

Have a Great Night, I'll update the blog tomorrow, and hopefully even Weather Cast.

Posted by KC Weather Admin at 9:55 PM No comments: