Haven't blogged or updated the forecast in 3 wks, 1st because of flooding, now sickness. I'll try to updated wxcast and stuff next week. To the right is the latest First Alert Doppler image as more Heavy Rain will be hitting the KC Metro. 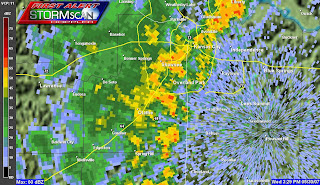 Already 2.00" have fallen here in Olathe!! The other image is the radar estimates of rainfall for the last 3 hrs. Click to enlarge. 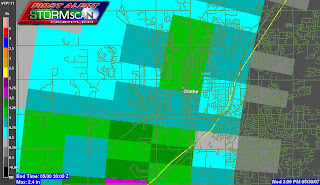 Posted by KC Weather Admin at 5:35 PM No comments: 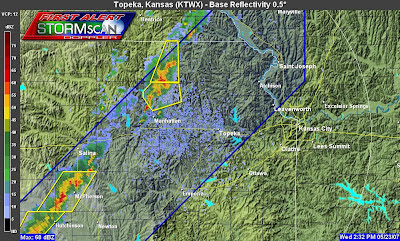 As you can see on the radar, there is Severe T-Storm Watch North and west of us with thunderstorms west and north. We will have our severe wx chance tomorrow morning. I'll blog later.

Posted by KC Weather Admin at 4:44 PM No comments:

A Wet week is ahead with a slight risk for severe weather, Tuesday Night, Wednesday, Thursday, and maybe Friday. I'll be trying to update the forecasts, my basement still needs the carpet clean after it flooded!! Have to get that done for sure!! I'll have more later as new data comes in.

Posted by KC Weather Admin at 11:44 AM No comments:

It's going to be a nice day, with a 30% chance of rain tonight. I'll try to blog later on this. Nice weekend coming up again.

Posted by KC Weather Admin at 2:26 PM No comments: 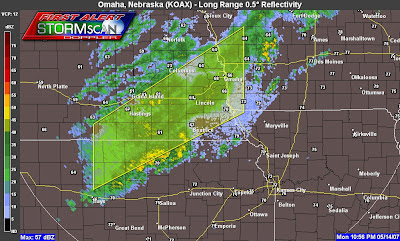 There is 100% of Rain tomorrow, as you can see on radar, the rain is in Nebraska it will be here around 8-9am tomorrow. I blog more later tomorrow.

Posted by KC Weather Admin at 12:41 AM No comments:

Scattered T-Storms will be possible again today. The weekend looks nice with Sunny Skies and Highs in the upper 80s for Saturday and Sunday!! :) Our next chance of rain is Tuesday. Luckily, we have not seen too many Tornado Outbreaks in our area. Pray for all those people in Greensburg,KS, our hearts and prayers go out to them.

Posted by KC Weather Admin at 11:00 AM No comments: 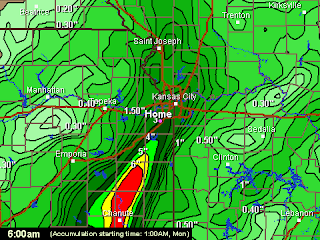 The Weather Cast Weather Center has been kinda flooded out, no damage done, just soggy, wet carpet. Rain totals so far have been 2-5"!! The pic to the right is FutureC asts prediction of rainfall for the next 2 days.(Click to enlarge) Flash Flood Watches and Warning and Flood warnings are in effect. I'll try to blog later.

Posted by KC Weather Admin at 2:40 PM No comments:

A Tornado Watch is in effect for Douglas County,ks until 4am

Posted by KC Weather Admin at 9:01 PM No comments:

It's raining with about 1" of rain in some places. I haven't been able to update Weather Cast with school and other stuff. Tomorrow, I might be going to Branson,Mo and Silver Dollar City depending on if it rains down there or not. The 80s and upper 80s,maybe , lower 90s return for the weekend!! Check out the Planner for Tomorrow and the 5 Day!!

Posted by KC Weather Admin at 9:00 PM No comments:

Rain and The LRC!

IT's going to rain today, so have the umbrella handy.

Now to the LRC or Lezak's Recurring Cycle Theory, I'm a believer in this. The Weather pattern this year is in a 40-45 day cycle as it cycles through we have some good storm systems that bring us rain. Here is an excerpt from his old blog, to read more go to http://blogs.scripps.com/kshb/weather/archives/2007/03/the_lrc.html#comments .

We have had a cloudy day so far with a cold front about to move through. Some light rain showers have formed but are ending already. You will know when the front moves through as the winds will pick up from the north and push the cloud cover south of us this afternoon. The clouds will stop moving south as the front stalls over Oklahoma tonight. Then, on Tuesday the front will force its way back northward and thunderstorms should be the result. So, Tuesday still looks like our best chance of rain between now and Wednesday.

After Wednesday a storm will be forming. Many of you have been following the LRC (Lezak's Recurring Cycle) the past few months. Remember the theory: The weather pattern sets up between October 10th and November 10th and then begins cycling. The pattern then cycles through July before falling apart in August. Now, I believe this is a major discovery and we have evidence that clearly shows that this happens every year without question. And, every year is unique. The cycle is not determined until we have gone through one or two cycles. By December or January when we begin a second or third cycle we gain confidence to what the pattern truly is. But, before this time, and as early as November 1st or so we can determine where the "long term" longwaves are located. Go back into the archives from the past two years and look at October and November entries.